It’s an age-old question—does it really matter if you are older or younger than your significant other?  Well, maybe not if it’s only by a year or two or five, even ten?  But, what about twenty years or more?  Now does it matter?

Is it possible to be romantically involved with someone who is ‘significantly’ younger than you are and not feel insecure about having them dump you to be with someone their own age?  Can you ignore the possibility of spending time—maybe years—with this younger person only to have them decide to leave when you are growing older and can no longer keep up with them physically or if they’ve outgrown you socially or financially as they have matured?  Does the younger person in this sort of relationship have concerns of their own about being replaced by someone older?  What if one of them has become embarrassed to be seen in public with the other one or to introduce them as their romantic partner or spouse?

In a May-December relationship how difficult is it to ignore the outside influences and pressures from society or family and friends who think that you would be so much better off with someone closer to your own age?

Will fears and self-doubt from one or both partners eventually destroy a relationship between two people who are from different generations?  Or, is age just a number if those two people truly love one another?

(I will be doing a series of blog posts about relationships, feelings and life in general as research and background material for my new book, A WOMAN MY AGE.  I look forward to hearing your opinions and comments on the subjects I will be discussing here.  Thank you.) 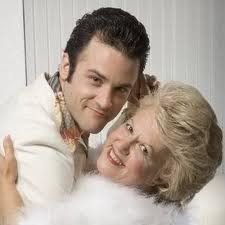